Clots can form due to many reasons that we all are aware about. Let's do a quick review of certain facts for this deadly diagnosis. 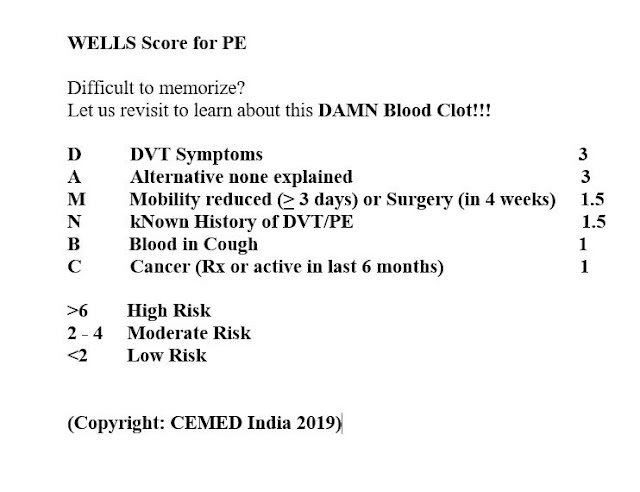 PEDIATRIC CARDIOLOGY in the ED

OBSTETRICS AND GYNECOLOGY
Posted by dr sajjad pathan at Friday, June 16, 2017 No comments:

1) 84 years old female is brought by ambulance with history of shortness of breath. On arrival, she is unable to talk in full sentences, but does complain of pain in the right chest. She is unable to take deep breaths while you ask her during auscultation. In her past medical history, she has HTN, DM, and multiple myeloma. Recently she was discharged after staying in the hospital for 7 days following a mechanical fall. She lives in a care home and rarely is seen out of her bed. She is on Flucloxacillin for her right leg cellulitis, apart from her routine medications. Her observations at triage are BP 100/80, Pulse 125/min, RR 19/min, Temperature 37.8 C, SpO2 on room air 82%. The diagnosis under consideration is an example of:

2) 12 years old African child is brought to the emergency department with complains of pain in the right knee. He suffers from Type 1 DM and Sickle cell disease, and is on insulins, folic acid and hydroxyurea as prescribed by his physician. The observations noted were BP 120/80, Pulse 115/min, RR 22/min, Temperature 39.2 C, SpO2 on room air 96%. The knee appears swollen, erythematous and tender. A diagnosis of infective etiology was made and appropriate treatment was commenced. What is the pathophysiology behind the presentation?

3) 25 years old male came to the ED with dysuria and urethral discharge. He is sexually active with multiple female partners in the past. He is stable but febrile. A Urinalysis is essentially normal. He has had three episodes of urethritis in the last 2 years. The two organisms implicated in this pathology display following features:

4) 16 years old girl is brought to the emergency department by her colleague because of a 2-day history of fever and a 12-hour history of lethargy. Her colleague say that she has been sleeping most of the day and has been slow to react when awake. Her temperature is 39.2°C (102.6°F). Physical examination shows numerous petechial hemorrhages and neck rigidity. A lumbar puncture yields cloudy cerebrospinal fluid and the microscopic examination of the CSF shows numerous segmented neutrophils, and a Gram stain shows gram negative diplococci. Which of the following is the most likely causal organism?

5) 38 years old man who recently immigrated to the UK comes to the GP Services because of a 1-month history of cough and a 5 kg weight loss. Physical examination shows no abnormalities. A chest x-ray shows a right upper lobe infiltrate. One of three sputum samples is positive for acid-fast bacilli. Treatment with isoniazid, rifampin, ethambutol, and pyrazinamide is started. Which of the following should be added to the medication regimen to prevent neurologic toxicity in this patient?

6) 54 years old man comes to the physician because of left shoulder pain that began after he injured himself at a tennis game 2 days ago. Examination of the left upper extremity shows no obvious bone deformities or point tenderness. The pain is reproduced when the patient is asked to externally rotate the shoulder against resistance; there is no motor weakness. In addition to the teres minor, inflammation of which of the following tendons is most likely in this patient?

8) 17 years old lady visited the ED with history of fever, fatigue, and sore throat for 3 days. She recently moved in with a roommate who has a cat. Her temperature is 37.8°C (100°F). Physical examination shows mildly tender cervical adenopathy and pharyngitis with no tonsillar exudates. There is mild splenomegaly. Laboratory studies show: Hemoglobin 13, Hematocrit 41%, Total Leukocyte count 11,500/mm3, Platelet count 150,000/mm3, Heterophile antibody titer positive. The most likely cause of this patient's condition is infection with which of the following?

9) Adolescent male was injured at a baseball match and became unconscious. He was hit on the temple before he passed out. About 15 minutes later, he regained consciousness spontaneously while being transferred to the A & E. As you are examining him, he becomes lethargic, and over the next few minutes, he becomes stuporous again. His pupils are unequal, and his GCS is E1V2M3. You have intubated this patient and are keen to rush him to the CT as you suspect an intracranial hemorrhage. Which of the following vessels is most likely to be the source of the hemorrhage?

10) 38 years old rugby player is brought to the ED with complaints of unable to feel or move his lower limbs after a forced flexion injury to his spine while dodging. He lies on bed, and a primary survey indicates preserved A, B, and Cs. In examination of disability, we assess the sensory dermatomal distribution from the abdomen downwards, T10 at umbilicus, T12 at pubis, L1 at Inguinal ligament preserved. No sensation below this level (to dull and pin prick), no motor functions, complete loss of muscle tone, No DTRs. No sensations at scrotal skin, but tenderness on pressing the testicles. Log roll done to reveal tenderness and step deformity at L1, and loss of rectal tone. The tender testicles imply:

This site complies with the HONcode standard for trustworthy health information:
verify here.